Black Mirror’s “Black Museum” and the History of Medical Experimentation on Black Bodies by Katie Mitchell
Tuesday January 9th, 2018 at 12:38 AM

Most “Black Mirror” episodes come across as “what if this really happened?” but when watching “Black Museum” it’s important to keep in mind that this isn’t a fictional cautionary tale. For Black people, it’s very real.

When deciding which episode of “Black Mirror” to watch first, I was immediately drawn to “Black Museum.” The preview screen showed a Black woman in an old school car somewhere in the desert. I wondered what conundrums a woman who looked like me would find herself in in this technologically advanced, alternate universe.

At the beginning of the episode, Nish (Letitia Wright) stops at a museum just off the stretch of road she’s been traveling on. The museum displays gadgets from high-tech crimes and is owned by a creepy, white man named Rolo Haynes (Douglas Hodge) who eagerly shows Nish artifacts and tells their detailed backstories, all of which he is personally involved.

Throughout Nish’s tour, the owner teases the main attraction, a hologram of an inmate who can be electrocuted via a museum patron controlled electric chair. It turns out, Nish isn’t the curious traveler she portrays herself to be. Instead, she is the inmate’s daughter who has come to seek revenge on her father’s and grieving mother’s behalf.

Of course Haynes doesn’t know this, and he still doesn’t realize it despite Nish’s obviously uncomfortable body language when describing the torture he inflicted upon her father.

In the end, Nish takes the eye-for-an-eye approach by torturing Haynes and burning Black Museum. The conclusion of the episode left me feeling vindicated yet overwhelmingly sad. I like “Black Mirror” because the stories seem just outside the realm of possibility, but “Black Museum” was different. The horrors of “Black Museum” have happened a million times before to Black people in the United States, and these horrors still continue today.

Related: THE RACIST ROOTS OF GYNECOLOGY & WHAT BLACK WOMEN BIRTHED

The Black Museum would have been just as heinous if it replaced the pain sensory cap with the speculum used by James Marion Sims to experiment on Lucy, Anarcha, and Betsey, enslaved women, against their will. Replacing the conscious stuffed animal with syringes used in the Tuskegee Experiment, a “study” in which white health officials lied to nearly 400 Black men about treating their syphilis, would still accurately portray a lack of informed consent from the people subject to experimentation. And while Henrietta Lacks’ cells weren’t being electrocuted, they were still used after her death without her knowledge for countless medical experiments that saved lives and made white people a lot of money, yet her family was never compensated.

Black bodies being subjected to sub par care and being regarded as less human isn’t solely a relic of the past. Right now, Black maternal mortality is at a record high; Black women are 243 percent more likely to die from pregnancy or childbirth-related causes than a white woman. Maternal mortality has claimed the lives of many Black women, including recently Erica Garner, a civil rights activists who — like Nish — wanted to see that her father received justice.

Most “Black Mirror” episodes come across as “what if this really happened?” but when watching “Black Museum” it’s important to keep in mind that this isn’t a fictional cautionary tale. For Black people, it’s very real. The truth deserves to be widely told. Black people in the here and now deserve justice too.

The post Black Mirror’s “Black Museum” and the History of Medical Experimentation on Black Bodies appeared first on Wear Your Voice. 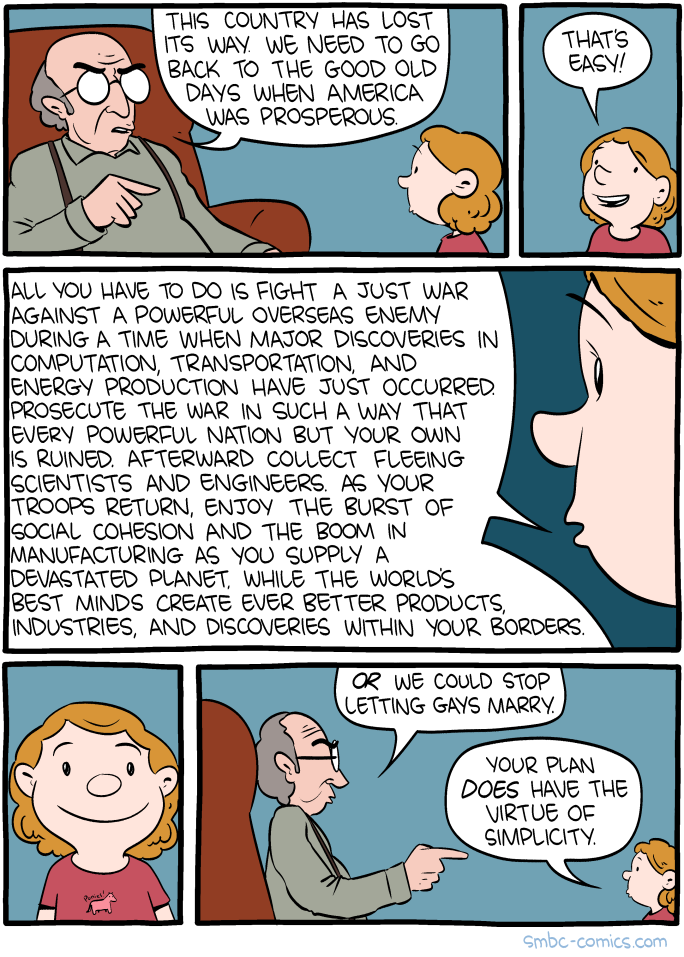 Hovertext:
Of course, the real trick is to adjust the top marginal tax bracket up or down by 2 percent.

In my hood, thieves seem to be in agreement that the best possible target is a house with a baby in it. And the police academy seems to teach all Simville police officers that babies find it very reassuring to be informed of any rewards or insurance claims related to the robbery, because they all barge in to the nursery to stand at the crib and talk to the baby about it. In light of the recent crime wave in my hood where multiple households with babies were robbed, I have decided my cops need to be taught some common sense and talk to someone actually able to understand what they are saying, for a change.

Intersectionality Proves A New Path to Victory for the Democrats by Katie Mitchell
Thursday November 16th, 2017 at 1:04 PM

Democrats are rejecting the idea that the party must disproportionately yield to the whims of the white working class.

This week’s victories energized progressives and members of the Resistance, the burgeoning liberal coalition that emerged in the wake of Trump’s election.

“I think those of us who care about the rights of human beings needed this victory,” said Lizz Winstead, cofounder of the reproductive rights organization Lady Parts Justice. “The gravy was so many women, women of color, and trans women won that it gives us hope that we are laying the foundation for the America that we all want to see.”

In an August 2017 Atlantic article titled “What’s Wrong With the Democrats?”, political journalist Franklin Foer argued, “if the party cares about winning, it needs to learn how to appeal to the white working class.” Many liberal advocates were concerned that, these calls to return to the white working-class would mean sacrificing the civil protections of minority groups to win elections.

However, after Tuesday’s electoral success, many Democrats are rejecting the idea that the party must disproportionately yield to the whims of the white working class.

Related: HOW MALCOLM X PREPARED US FOR A TRUMP PRESIDENCY

New York Times opinion journalist Charles Blow touted the victory of an inclusive and intersectional coalition, writing that “Tuesday night’s election results were a major shot in the arm for the anti-Donald Trump resistance and a major slap in the face for all the Democrats who caterwauled last November about how the party had focused too much on courting women and minorities, and ignored angry white men.”

Beyond mobilizing the left and providing renewed direction for the Democratic party at large, this week’s elections have all so stoked fears within the Republican Party. Party power players like Paul Ryan and Steve Bannon, have made comments either trying to reframe the losses or trying to advance a new strategy that would allow them to hold on to the midterm seats after the election.

For the left, Tuesday’s victories provided a much-needed win after marquee losses earlier in the year in special elections like that of Jon Ossoff in Georgia. However, this week’s elections show Americans have been unhappy with the Trump Administration, and that they are showing out in large and impressive numbers.

After a year of prolonged scandals ranging from banning transgender members from joining the military, to supporting efforts to preserve Confederate memorials, to sympathizing with white nationalist, the Trump presidency appears to be showing its first significant political losses.

It’s important to keep this momentum going and to hold the newly elected progressives accountable to their constituents. All skinfolk, ain’t kinfolk. They must earn trust and perform. Moving forward, many political analysts and activists will have their eyes peeled on what the Republicans do with their remaining time before the midterms, and if next year Democrats will repeat a similar sweep on a larger scale in 2018’s elections.

The post Intersectionality Proves A New Path to Victory for the Democrats appeared first on Wear Your Voice.

Euphemisms for Disability are Infantalizing by crippledscholar
Thursday November 16th, 2017 at 1:01 PM

I have written about the importance of language as it relates to disability before. To oppose the idea that clear language should be avoided in favour of what can best be described as pretending difference doesn’t exist to opposing the replacement of clear language with euphemisms. Euphemisms are rampant in disability discourse. There is […]

A full edit history would show all sixteen ways I rewrote each individual sentence because I was trying to figure out the best way to word it, what details to include or omit, etc. And a couple of structural rewrites.
East Helena, MT

"...just got back and didn't see your message until just now. Sorry! -- TIME THIS MESSAGE SAT HALF-FINISHED IN DRAFTS FOLDER: 3 days, 2 hours, 45 minutes."
Next Page of Stories